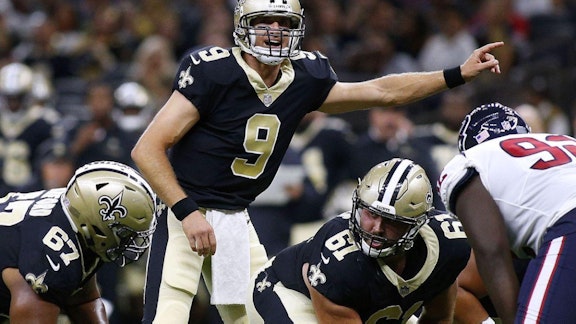 NFL Kickoff season concludes tonight with the traditional Kickoff MNF doubleheader. The New Orleans Saints host the Houston Texans, followed by the nightcap when the Denver Broncos take on the Raiders in Oakland.

Here are 7 good bets for some Monday Night Fun.

Still angry from last season playoff unfair exit, the Saints will fight hard and should win this one in primetime.

The Over/Under is a close call. High scoring game? Yes, for sure, but the Texans defense should be able to hold the Saints to normal numbers. Houston can air out points but should struggle on the ground. I will take the under tonight.

DeAndre Hopkins (-125) for over 6.5 receptions. Well, another great chance here.

This MNF primetime showdown has “Battle of the Best WRs in the NFL” written all over.

Houston could be trailing, I can see Hopkins finishing the game with 8-10 receptions and over 100 yards on a lost cause.

The Oakland Raiders are a mess after so much drama in the offseason. Denver looks good for a decent season, starting tonight.

Broncos again. This is a very close call. I can see the Raiders fighting hard and coming up short. How short? A field goal, perhaps! But you could also see the Broncos winning by double digits. So, yes, Broncos cover it.

Sorry, but I think this is a night with no many touchdowns on the board, 21-10 kind of game. If the Raiders fight hard, maybe 20-17. In both cases, well below 44 points. Take the under.