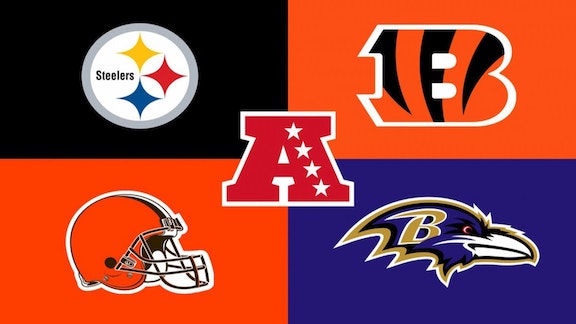 The Pittsburgh Steelers have historically owned the AFC North, winning 23 division championships. The Cincinnati Bengals with 10 titles are second best followed by the Cleveland Browns (6) and the Baltimore Ravens (5). After much drama, the Steelers fell apart last season leaving the door wide open to the Ravens. The Browns (who knew?) look like a legit contender this season. The Bengals are going to have a tough season.

Most casual fans probably don’t remember that the Baltimore Ravens took down the division crown in 2018. In one of the toughest divisions in football, 2019 should prove to be another hard fought battle for the AFC North. The Ravens must like what they see in second year quarterback Lamar Jackson. They moved on from long time starter Joe Flacco who is now with the Denver Broncos. The Ravens have always been known for their defense, but it took quite a hit in free agency.

On paper, the Baltimore Ravens offense doesn’t exactly pop with excitement. Running back Mark Ingram is on board, signing from the New Orleans Saints. He should be an excellent fit for a team who runs the ball as much as the Ravens. Dual threat QB Lamar Jackson will also shoulder some of the rushing load, making this offense intriguing despite their lack of proven receiving threats.

Final Thoughts: The Ravens offense will live and die with Jackson and whether he can develop into an NFL passer. They should again lead the NFL in rushing attempts.

Free agency saw a good chunk of Ravens defenders move on to new teams, leaving the cupboard a bit bare. Long time sack specialist Terrell Suggs is gone to the Arizona Cardinals. Inside linebacker stud CJ Mosely left for the New York Jets, leaving the LB corps to rebuild. The Ravens did land a big name too. Earl Thomas the former Seattle Seahawks safety brings an intense style of play similar to Suggs.

Final Thoughts: Lacking a pass rush and any veteran, proven linebackers leaves a lot of questions surrounding the Baltimore Ravens defense this year.

The Baltimore Ravens have one of the widest range of outcomes of any team this year. They are incredibly young on both sides of the ball, and for those reasons I’m not touching anything around the Ravens until later in the season after we have seen them play a bit.

2018 was a surprisingly down year for the Pittsburgh Steelers. However, considering all of the information we have now about the drama surrounding Antonio Brown and Le’Veon Bell, the Steelers internal issues led to them missing the playoffs. Brown and Bell are now gone and the Steelers will look to forget about 2018.

In 2018, the Ben Roesthlisberger threw the ball more than any team in the NFL. The high powered passing attack replaces Antonio Brown with former Colts and Jaguars wide receiver Donte Moncrief. Third year breakout star wide receiver JuJu Smith-Schuster takes over the lead dog pass catching role, and should thrive. He’s already established himself as one of the best young receivers in the game. Running back James Conner officially replaces Le’Veon Bell in the backfield and was an efficient replacement.

Final Thoughts: Even with the departure of two of the best players in Steelers history, Big Ben should continue to lead this unit as one of the best offenses in the league.

As usual, the Pittsburgh Steelers defense was good, but not great in 2018. They finished as a top 10 unit in both passing and rushing, but dead in the middle in total defense. The Steelers have been missing a big-name, splash playmaker on defense for years. That may change in 2019, as the Steelers moved up in the 1st round to select linebacker Devin Bush out of Michigan with the 10th overall pick.

Final Thoughts: If the Steelers can improve upon creating more turnovers, they will be back to being talked about as one of the best defensive teams in the league.

The Pittsburgh Steelers will look to bounce back from a disappointing 2018 season. Laying some units on the over for season win totals, and even to win the Super Bowl would be wise investments.

After finally moving on from abysmal head coach Hue Jackson (3-36-1 in THREE years as head coach!) the Cleveland Browns finished 2018 with a 5-3 record and head into 2019 with a full head of steam. Quarterback Baker Mayfield has everyone excited after he took over in week 3 and led the Browns to their first victory of the season.

Star wide receiver Odell Beckham Jr. joins the Cleveland Browns via trade for 2019. This is one of the many reasons the Browns are the darlings of the NFL right now. QB Baker Mayfield is surrounded by weapons both in the passing and running game. Running back Nick Chubb enters his second year with a ton of hype surrounding him. Especially after the Browns recently just traded away RB Duke Johnson to the Houston Texans.

Final Thoughts: If the O line can protect Mayfield and open up running lanes for Chubb, this offense will flourish. Staying healthy will be key for star acquisition OBJ.

A lesser talked about reason as to why the Browns are expected to take a huge leap in 2019 is their defense. Last year they gave up a ton of rushing and passing yards. However, the were second only behind the Chicago Bears in forcing turnovers. Defensive end Myles Garrett has a lot more help on the line, which should free him to have a career year in sacks. Second year cornerback Denzel Ward will need to make a step forward and shut down opposing wide receivers.

Final Thoughts: If the secondary can step up and limit big plays, the Cleveland Browns defense may be talked about as one of the best in the league.

With all of the positivity and hype surrounding the Cleveland Browns this year, Vegas has made betting on them quite unattractive. The Browns season win total and Super Bowl odds make them a riskier bet than needed.

The Cincinnati Bengals seem headed straight down a path leading them to become the BUNGALS yet again. After a decent stretch run, head coach Marvin Lewis is finally out. That move was probably long overdue, as it seemed as if Lewis was not adapting to the changes in the NFL. Enter Sean McVay disciple Zac Taylor as the new coach of the Cincinnati Bengals, who is a complete 180 from Lewis.

Bad luck has struck the Cincinnati Bengals already before the 2019 season has officially even started. They have lost their top draft pick offensive lineman Jonah Williams on what was already a bad offensive line. Star wide receiver AJ Green, who only played nine games in 2018, is once again dealing with a foot injury and is expected to miss at least 4-6 weeks. Quarterback Andy Dalton is another year older and faced some injury issues of his own in 2018. About the lone bright spots on this offense are young talents at running back - Joe Mixon, and wide receiver - Tyler Boyd.

Final Thoughts: Things are not looking good for the Bengals offense. With long-term injuries to key players already, the Bengals will be struggling to move the ball.

On defense, the Cincinnati Bengals aren’t looking much better than their offense. This unit was near the bottom of the league in nearly every relevant category, and gave up the most passing yards of any team. Not great! The Bengals defensive line has the most talent and can pressure opposing quarterbacks, but the stars are aging (Geno Atkins, Carlos Dunlap).

Final Thoughts: If the linebacker corps does not improve, we will see more of the same, if not worse, play from the Cincinnati Bengals defense.

The Bengals stink and could easily be picking #1 in next year’s draft. If you can bet on that, go for it. Otherwise I’m only betting against the Bengals this year.