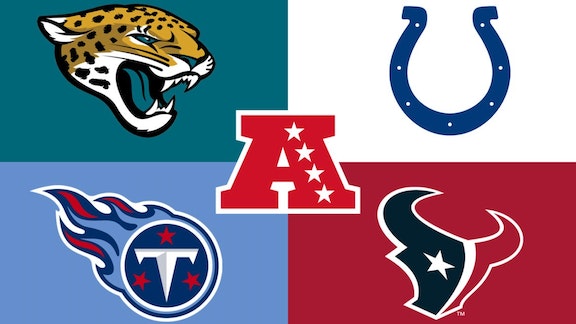 One of the newest divisions in the NFL, the AFC South has had one team winning 9 out of the 17 division titles: the Indianapolis Colts, yeah, thanks Payton Manning. After Indy, the best team is the Houston Texans with 5 trophies in hand but the other two teams are really far back. The Tennessee Titans has only won it twice and the Jacksonville Jaguars won the division for the first time back in 2017. The Texans won last year and, once again, are the favorites this season.

In one of the more competitive divisions in the NFL, the Houston Texans took the division crown in 2018. Behind both a healthy quarterback, Deshaun Watson, and healthy, reenergized defense, head coach Bill O’Brien fell short of advancing in the playoffs. The Texans will look to avenge their Wildcard round loss to the division rival Indianapolis Colts.

Coming off an injury plagued rookie year in 2017, quarterback Deshaun Watson avoided further injury and was among the best statistical QBs in 2018. That consistency was key for the Texans success. Of course having the best wide receiver in the game helps as well. WR DeAndre Hopkins also played all 16 games in 2018, but was fighting some injuries himself, including one revealed to be quite serious from the playoff loss. Hopkins is reportedly healthy though for the upcoming season.

Final Thoughts: As is the case for most teams, the health of the Texans' star players will be key to repeating the successful year. They are a steady, well balanced offense.

Dealing with his own injuries over the past few years, star defensive linemen JJ Watt played the entire season and enjoyed a bit of a resurrection recording 16 sacks. As a team, the Houston Texans finished with the fifth best team defense and was one of the best against the run. Their passing defense was bad, and the Texans are hoping their fearful pass rush can remain fierce and improve their ranking in 2019.

Final Thoughts: If Houston can get some better play from their young secondary, this could once again be a top-5 defense with one of the scariest pass rushes in the league.

The AFC South is shaping up to be similar to the NFC East. Extremely competitive and teams can go from worst to first very quickly. Expectations for the young Texans are to finish better than 2018 and win a playoff game in 2019.

The Indianapolis Colts experienced a roller coaster of a season in 2018. They started the year 1-5 but finished 9-1 and beat the Houston Texans in the Wildcard round of the playoffs. Franchise quarterback Andrew Luck was finally healthy and carried the team on his back into the playoffs.

In a shocking turn of events, franchise quarterback Andrew Luck has chosen to retire in his prime. CIting that he’s mentally worn down, and dealing with some nagging injuries, it appears Luck just isn’t happy playing football. This turns the entire outlook for the Colts upside down and without Luck, they should now join the bottom of the barrel teams.

Unfortunately, quarterback Andrew Luck had been dealing with a new injury issue during training camp. After dealing with injuries in his arm and shoulder, Luck has finally decided to give it up. As for the Colts, this franchise cannot expect to win without Luck as their QB and captain but the team has an arsenal of talent on offense. Star wide receiver TY Hilton, rookie speedster WR Parris Campbell, who the Colts selected out of Ohio State in the second round, and tight end Eric Ebron, who was a red zone touchdown scoring machine in 2018, should keep some hopes to repeat that success. The Indianapolis Colts also signed free agent wide receiver Devin Funchess away from the Carolina Panthers in free agency. The problem is pretty simple. Jacoby Brissett isn’t Andrew Luck… and that says it all.

Final Thoughts: The Colts have just gone from a potential Super Bowl pick to a team hard to trust this season. Andrew Luck will be missed.

The Colts discovered a gem in the 2018 draft, selecting linebacker Darius Leonard in the second round. He went on to lead the NFL in tackles last year. Leonard was one of the lone individual bright spots on the Colts defense. As a unit, however, the Colts were quietly the 10th best team defense. They brought in an aging sack specialist, Justin Houston, from Kansas City to help on the defensive line.

Final Thoughts: Most people wouldn’t remember the Colts being among the top-10 defenses last year. This young unit could continue to improve and finish even better in 2018.

A popular pick (rightfully so) to win the Super Bowl, the Indianapolis Colts will now be just pretenders this season. Andrew Luck would have given Indy a chance to compete for the division title. Now, a playoff spot doesn’t even seem possible.

The third team from the AFC South to make the playoffs in 2018, the Tennessee Titans exceeded expectations. Rookie head coach Mike Vrabel overcame a sub par offense, and elevated the Titans defense to one of the best in the league. Fans are hoping for more of the same in 2019.

Quarterback Marcus Mariota will have one more year to prove he was worth the 2nd overall pick in 2015. He has battled injuries throughout his career thus far and has flashed great play along the way. Mariota’s great performances have been few and far between, however. The Titans finally unleashed running back Derrick Henry over the last quarter of the season, after having him split time with newly signed free agent running back Dion Lewis. The running game mirrored the passing game for most of the year and was uninspiring outside of a couple monster games from Henry late in the year.

Final Thoughts: Coach Vrabel sounds committed to giving Henry the bellcow role after some impressive games. Mariota needs a big year for the Titans to resign him.

Being a former linebacker for the New England Patriots, head coach Mike Vrabel was expected to bring his knowledge and lead a good unit. He vastly outperformed expectations and had the Titans finish 3rd in total defense. The Titans have a really good, youthful core at all positions, including star safety Kevin Byard who signed a new 5 year contract making him the highest paid safety in NFL history.

Final Thoughts: The Tennessee Titans have a great defense that shows no signs of regressing and should remain a top 5 unit in the league.

The success of the Tennessee Titans hangs with their offense this year. They are a team that is tough to predict because of that and has one of the widest ranges of outcomes for 2019. I would be most comfortable taking unders on some of their games because of their staunch defense and unpredictable offense. Throwing a hail mary on a Super Bowl win wouldn’t be a terrible choice either.

Expectations were high for the Jacksonville Jaguars in 2018, as they were only 1 game away from playing in the Super Bowl in 2017. Unfortunately they fell flat and didn’t even make the playoffs. Quarterback play was bad and QB Blake Bortles is now backing up Jared Goff in Los Angeles. The defense also took a step back and although they still ranked among the best in the league, the big plays and scoring from 2017 were not there.

Enter Super Bowl 52 MVP quarterback Nick Foles and the Jacksonville Jaguars are reinvigorated and excited for their offense in 2019. BDN reunites with offensive coordinator John DeFilippo who was apart of the Philadelphia Eagles coaching staff during their Super Bowl victory. The Jaguars are hoping their top draft pick from 2017, running back Leonard Fournette, can stay healthy and finally live up to his potential. There is a stable full of young wide receivers with talent in Jacksonville as well.

Final Thoughts: Foles should be considered an upgrade over Bortles and the Jaguars have set their offense up in a position to succeed.

Finishing as the 4th best team defense in football, the Jacksonville Jaguars 2018 season was incredibly disappointing. Their best linebacker, Telvin Smith, is apparently sitting out the upcoming 2019 season for personal reasons. However, there is still enough talent, especially on the defensive line, for the Jaguars unit to again finish as one of the best in the league. Defensive linemen Calais Campbell continues to be one of the best sack masters in the NFL.

Final Thoughts: the Jaguars defense remains one of the top and scariest units in the league. If they can shut down the opposing team’s passing attacks, this defense can carry the Jaguars back to the playoffs.

Both the over on season win total and the Super Bowl odds for the Jacksonville Jaguars seem like incredibly reasonable bets to make this year.