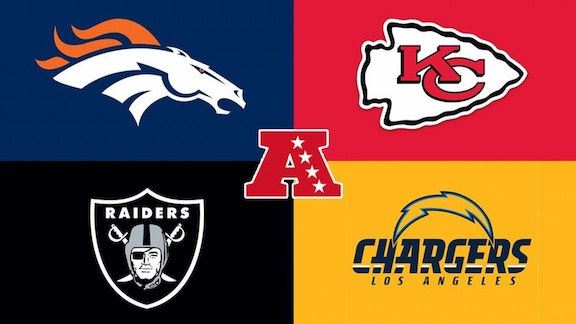 The AFC West is historically the most competitive division in the NFL. A three-way tie for the most division championships says it all. The Denver Broncos, the Los Angeles Chargers and the Oakland Raiders are tied with 15 division titles. The Kansas City Chiefs have “only” won it 11 times. Who will win for the 16th time? Or is it KC time to close the gap?

What a season for the Kansas City Chiefs. Andy Reid coached essentially a rookie QB in Patrick Mahomes to a historic passing year. Despite losing running back Kareem Hunt mid-year, the Chiefs rode an electric offense to the AFC title game where they came up just a bit short. Maybe 2019 will finally be the year coach Reid can fulfill his potential and win a Super Bowl.

The Kansas City Chiefs offense is stacked. Quarterback Patrick Mahomes enters his third year riding the high of one of the best performances in NFL history. Troubled wide receiver Tyreek Hill avoided suspension and is primed to play an entire year. Superstar tight end Travis Kelce is healthy and should enjoy another year atop the position. Even though running back Kareem Hunt is gone, an Andy Reid offense is essentially plug and play at that position. Fantasy players will remember RB Damien Williams from last year who won many people fantasy championships.

An area of much needed improvement is the Kansas City Chiefs defense. They finished among the league’s worst in both rushing and passing defense. The Chiefs have added a couple big names to the squad via trade and free agency. Defensive end Frank Clark brings his pass rushing abilities from the Seattle Seahawks. Big play safety Tyrann Mathieu joins the team from the Houston Texans.

With the somewhat unexpected success the Chiefs experienced in 2018, they are expected to repeat and this is reflected in their Super Bowl odds and projected wins. I’d actually take a shot on a bit of regression and bet they do not win as many games as Las Vegas thinks. But on a game to game basis I’ll be looking to take the overs in Chiefs games more often than not.

Most people won’t remember that the Los Angeles Chargers won as many games as the Kansas City Chiefs in 2018. Balanced on offense and defense, the Chargers were the best team nobody paid attention to. With a bad injury to a key defensive star, and bellcow running back holding out for a new contract, the deck could be stacked against the Chargers heading into 2019

The big story surrounds the Los Angeles Chargers star running back Melvin Gordon. He is holding out for a new contract a la Le’Veon Bell and it is wildly uncertain whether he is going to get it or not. The Chargers have some capable replacements should Gordon not play, but it will certainly hurt to lose him. Quarterback Philip Rivers does get back one of his favorite weapons in tight end Hunter Henry. Henry missed all of 2018 with a torn ACL last May. Third year wide receiver Mike Williams is primed to continue his breakout from 2018 when he scored 11 total touchdowns.

Final Thoughts: Despite the Gordon drama, the Chargers offense still has plenty of weapons. Rivers will lead this unit once again, competing for a division title.

Second year safety Derwin James suffered a significant foot injury and will be placed on IR prior to week 1. This is a big blow for this sneaky good defense that finished top 10 in overall, passing, and rushing defense. A strong pass rush led by defensive end Joey Bosa and hard hitting secondary were the reasons the Chargers played so well. Bosa should be fully healthy in 2019. A stable of young, talented linebackers will also look to improve their play and make up for the missing Derwin James watching their backs in the secondary.

Final Thoughts: If Joey Bosa can play a full year, and the linebackers improve their play, the Chargers should see similar results to their top 10 finish from 2018.

Philip Rivers seems like he is going to be this generation’s Dan Marino. One of the best who just can’t get that elusive Super Bowl. I don’t like the Los Angeles Chargers as one of the top teams predicted to win the Super Bowl this year. Their potential to exceed their season win total, however, is much more attainable.

In 2018, the Denver Broncos enjoyed a very pedestrian season. After signing quarterback Case Keenum from the Vikings, the offense sputtered. This led to the Broncos moving on from both Keenum and head coach Vance Joseph. New head coach Vic Fangio brings his defensive mind from the Chicago Bears to right the ship.

The big move which the Denver Broncos made was trading for long time Baltimore Ravens quarterback Joe Flacco. They are hoping for better results than Case Keenum produced in 2018. Diamond in the rough running back Philip Lindsay, who was an undrafted free agent, returns to head up the running game which was the lone bright spot on the Broncos offense last year. The Broncos also have a young stable of wide receivers who they are hoping one or two can break out. Wide receiver Emmanuel Sanders is returning from a torn Achilles, but reports say he looks faster than ever.

Final Thoughts: The Broncos offense is counting on a resurgence from Flacco, along with their young group of WRs. The running game remains the strength of this unit.

Only 3 years ago, the Denver Broncos defense led them to a Super Bowl victory. Guys like Von Miller are still around, and they have added even more pass rushing talent in players like Bradley Chubb. Lockdown cornerback Chris Harris Jr will likely shadow most opposing top wide receivers all year.

Final Thoughts: The potential still very much exists for the Denver Broncos defense to once again reclaim the top spot as the NFL’s best.

I don’t believe in the Broncos’ chances to win a Super Bowl in 2019. However, I do think they could easily exceed their projected win total. QB Joe Flacco is a substantial upgrade at QB over Case Keenum.

Save the best for last, DA RAIDDDDDERRRSSS. The Oakland Raiders were among the worst teams in the NFL in 2018. Head coach Jon Gruden was given an unprecedented TEN YEAR contract to return this franchise to greatness. He came up quite short in 2018. The stars of HBO’s Hard Knocks this year will look to capitalize on their three 1st round draft picks from this year’s draft. And oh yeah, the Raiders traded for superstar wide receiver Antonio Brown in case you didn’t know.

Quarterback Derek Carr has lots of new shiny toys to play with in 2019. One of the Oakland Raiders first round draft picks was used on Alabama running back Josh Jacobs. Coach Gruden is very excited to use this young man as his newest bellcow running back. Drama seems to follow Antonio Brown these days. He forced his way out of Pittsburgh and now in Oakland can’t seem to find the correct helmet. Despite all of this, he is still the best wide receiver in the game and should bring a bit of hope to improve upon last year’s abysmal offense.

Final Thoughts: With the addition of Antonio Brown, the Raiders offense has high hopes. Carr will look to captain this offensive unit to a much better season than in 2018.

The worst defensive unit in the NFL used two of its 2019 first round picks on defensive players. Defensive end Clelin Ferrell out of Clemson, and tackling machine safety Jonathan Abram out of Alabama immediately enter the starting lineup. The linebackers are revamped as well. Vontaze Burfict joins the team from the Cincinnati Bengals to provide some veteran leadership at the position.

Final Thoughts: There isn’t much room to go anywhere but up for the Raiders as they should finish better than dead last in 2019. How much better is very much unknown.

The Oakland Raiders are another team with a wide range of outcomes. My gut says they will exceed their season win total, however a Super Bowl victory is very much out of the question.