Virgin NJ Casino is licensed by Tropicana Casino and operated in partnership with UK based online software and gaming operator, Gamesys. Virgin Casino is part of the Virgin Group owned by Richard Branson. 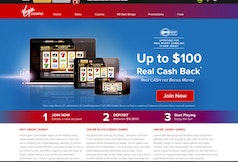 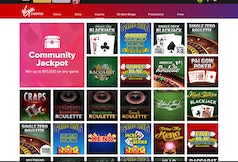 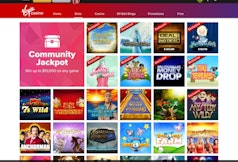 Welcome to the Virgin Casino review by United Gamblers.

The review is for casino players in New Jersey in search of a regulated online casino to play in the Garden State.

On this page, we highlight the pros and cons of Virgin Casino NJ and discuss the features which make Virgin one of the standout New Jersey online gambling options and summarise why this is may or may not be the casino for you.

If you’re wondering if this Virgin is the same Virgin you’ve seen somewhere else - like an airport run way for instance - then you’d be right! Virgin Casino is one of the many companies that come under the Virgin umbrella owned by Sir Richard Branson.

Virgin is run in collaboration with UK gambling operator Gamesys

Like all NJ online casinos, Virgin is licensed by an Atlantic City land-based casino - Tropicana Casino & Resort. The Trop operates the site in partnership with leading iGaming developer Gamesys. Like Tropicana online casino NJ, Virgin has been on the scene in New Jersey since online casino gaming was legally permitted back in 2013.

The site was granted licensing approval by the New Jersey Division of Gaming Enforcement (NJDGE) in November 2013 and launched in January 2014.

Who can play at Virgin?

Virgin is available for all those interested in playing casino games online in New Jersey. You can use Virgin without the need for NJ residency and its possible to browse games and access account information outside of NJ.

The main condition you need to remember is you won’t be able to gamble unless you’re inside New Jersey state lines at the time a real money wager is placed.

Checklist for players at Virgin

The Virgin sign-up offer is the same as the one on offer at Tropicana - a Cash Back offer up to $100. All new customers to Virgin casino are entitled to claim this bonus which essentially gives you a second chance to win big should your first wager prove unsuccessful.

Life is all about second chances - if your first wager loses, Virgin will give you another shot

All you need to become eligible is make a first deposit of at least $10 and place a wager. If you lose, Virgin pay you back out of their pocket. It’s a nothing-to-lose offer that sees your net losses covered up to $100.

The bonus offer only applies to new customers who prove unlucky on their first occasion. If you win, the bonus does not apply!

To become eligible for this welcome offer, you need to sign-up and create a Virgin casino account.

Here’s how you claim the sign-up offer in a few simple steps.

Offer applies to New customers only

Must be located in New Jersey to claim offer

All NJ online casinos offer their casinos on mobile apps and Virgin casino is no different.

To download, simply head to the App Store if you’re an Apple iOS device user or download directly from the Virgin casino website if you’re an Android user.

How to download Virgin online casino app for iOS

How to download Virgin online casino app for Android

Overall, it’s hard to say a bad word about the Virgin app - it’s powered by Gamesys, widely known as one of the leading iGaming operators in the business. As such, it's on the money in many areas, including speed, user-friendliness, and layout which is very focussed on the wants and needs of the customer.

But it wouldn’t be a United Gamblers review without balance. The app is let down slightly by a noticeably smaller pool of games compared with the desktop version - more table games would be nice for example. This aside though, the Virgin online casino app is one you should download and try for yourself.

If it's slot games you’re after, you’re in luck because Virgin offers exclusive titles on both desktop and mobile. One of the biggest draws of any online casino is the ease in which players of all levels can start to play and win almost immediately. Virgin breaks down their package of games into Slots, Casino, and 90 Ball Bingo.

Here’s a sample of what you can expect games wise:

With honesty the best policy very much at the forefront of our reviews, it’s fair to say other NJ online casinos offer a better and deeper set of games than Virgin. Our ‘could do better’ applies to the selection of game options overall. There are also no live dealer games to choose from at Virgin.

Virgin is the sister site of Tropicana so naturally, the two are similar in many areas. Deposit and withdrawal options are an example of this.

Richard Branson’s business empire is based on exceptional customer service. So can the same be said of Virgin casino as well?

It’s pleasing to know it does indeed live up to the high standards. Support is available 24/7 via several modes of communication including live chat, phone and email. If your issue isn’t urgent the FAQ section which can be accessed by clicking the Question mark (?) icon at the top right of your screen is also helpful.

Do I need to be a New Jersey resident to sign-up at Virgin?

No. The regulations set out by the New Jersey Division of Gaming Enforcement does not require you to be a resident of NJ.

Yes. When you hover over a game you intend on playing you will be given two options: “Play Now” and “Demo”. If you want to play the game for free, select “Demo”. This will give you a chance to try the game before playing for real cash.

Why can’t I withdraw money to my VISA/Mastercard?

Currently, Virgin does not support the use of VISA/Mastercard to withdraw money. It’s hoped the withdrawal methods are improved in the future. For now, the ways you can withdraw consist of: