Owned by global online gambling operator, Kindred Group, Unibet is a prominent sports betting and casino brand in Europe and Australia now making a name for itself in North America. Bettors can look forward to first class live betting experience available across an array of sports and one of the best betting apps available. With three successful state launches in New Jersey, Pennsylvania and Indiana already in the bag - and more states on deck - Unibet's US expansion is well underway. 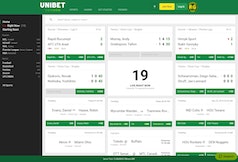 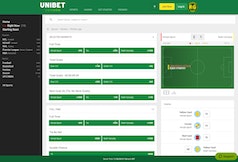 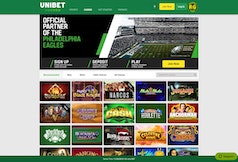 ✅ Safe and trusted US operator

👎🏼 Unibet USA: Could Do Better

Unibet is hugely admired in over one hundred betting markets around the world but how does its product rank in the US?

We dig deep into the pros and cons of Unibet and, using our experience of betting sites, give our honest take of whether Unibet is the right betting site for you.

Here's how we've scored Unibet. Click on any of the criteria for our reasoning.

Where Unibet is available in USA

We expect the betting brand to expand its US footprint in at least seven more states including Iowa, Illinois and Ohio once the Buckeye State approves legal sports betting.

Who can use Unibet?

To register with Unibet, you need to be aged 21 years or older and physically located in a Unibet legal state (NJ, PA, IN).

You do not need to be a resident of one of these states in order to place a real money wager.

A note on Unibet Verification

Every US betting site is subject to carrying a KYC (Know Your Customer) check on all new customers. It’s basically a procedure that considers your suitability for a betting account, assesses any risks and confirms your identity.

For your online security, you may also be asked to provide documentation in order to process withdrawals. The type of documents needed depend on the method of payment but include photocopies of credit/debit cards, a copy of bank statements, a copy of photo ID (passport, drivers license).

New customers to Unibet sportsbook in New Jersey, Pennsylvania and Indiana are eligible to claim a risk-free bet up to $500. The offer works like this; you create an account, make a deposit and place a wager on any sport and any market, as you normally would.

Except, your Unibet Sign-up bonus provides you with a safety cushion whereby, should your first wager lose, you will be refunded your deposit money in cash.

Here’s what you need to do to collect your introductory offer.

How does the Unibet sign-up bonus compare with the competition?

Unibet has recently upped the stakes in terms of its welcome bonus offer, doubling the risk-free bet from $250 to $500. The move has certainly brought Unibet more in line with the competition, all of whom are offering new customers upwards of $500. Alongside the deposit bonus, Unibet is also putting $40 worth of Free Bets in your pocket to truly welcome you on board!

Often, a quick browse of the banking options available can tell you a lot about the quality and reliability of a betting site.

You’ll be glad to know, Unibet supports all the major payment methods including VISA/Mastercard, PayPal and PayNearMe and provides a nice balance of online and offline options to suit all bettors.

Do note, however, that payment options vary between states.

How you can deposit at Unibet in New Jersey

How you can withdraw money from Unibet in New Jersey

How you can deposit at Unibet in Pennsylvania

How you can withdraw money from Unibet in Pennsylvania

How you can deposit at Unibet in Indiana

How you can withdraw money from Unibet in Indiana

Will I get charged for deposits and withdrawals at Unibet?

Unibet does not charge you for making deposits or withdrawals. However, additional charges may apply with your bank or card provider so we suggest that you check this prior to proceeding with any transaction.

What is the minimum amount I can withdraw at Unibet?

$10 is the minimum amount you can withdraw at Unibet.

How long does it take to get my money at Unibet?

The amount of time it takes for you to receive your withdrawal depends on the method used. Please be aware withdrawal times may also vary between states.

You can access Unibet on mobile via the Unibet betting app, which is available to download for iOS and Android devices. Once downloaded and fully loaded, you can use the Unibet mobile betting app to create your account, deposit money and make wagers - there’s no limitations to what you do on the Unibet app.

One big tick from us is the similarity between the app and the desktop site in terms of design and functionality, while the super clean layout means navigating the app is straightforward and easy to use.

Performance wise, we found the app to be responsive, smooth and free of glitches. There's no doubt about it, the Unibet app is up there as one of the best on the market. A high-class product in every way, the Unibet app has everything you need for a fun and seamless online betting experience.

Available on iOS and Android

Due to Google’s restrictions on gambling apps (which are soon set to be lifted incidentally) users with an Android device need to download the Unibet app via a link at the bottom of the Unibet homepage.

There is no charge for downloading the Unibet app.

Find the game you want to wager on and you will discover a range of markets that’ll allow you to predict an element of the game that interests you most.

From typical betting lines such as point spread, money line, and totals, to parlays, scorecasts, player and team props and futures, there is an endless number of markets open for you to place your money, all of which are easy to find and presented clearly.

Unibet’s selection of sports is vast. From mainstream US sports, to international sports and less common sports in America such as Rugby Union, Cricket and Darts are all available to bet on.

Within each sport, you’ll also find the most popular (and niche) leagues and competitions listed and an array of betting markets to choose from.

It has to be said, we found the betting menu to be one of the most comprehensive of all the US betting sites.

Variety of sports at Unibet

Whether it’s a common query or specific issue, you’re probably going to need support to some degree, especially if you’re a beginner. To know you have a reliable level of customer support is therefore reassuring.

Fortunately, Unibet provides several means of support including a direct phone number, email address, and a live chat facility available 24/7. Included within the Support section is a handy search tool designed to help you find what you’re looking for as quickly as possible.

Besides this, there’s also the Unibet Help Center which provides a series of articles that answer FAQS and a section dedicated to responsible gaming. Within this, bettors can find guidance on what to do if gambling becomes a problem, tools to place limits and the contact details of various organizations that can provide help and support.

In short, it’s clear to see that Unibet prides itself on customer service and is committed to responsible gambling.

Customers in these two states can benefit from a huge library of popular online casino games and slots, as well as a number of Live Dealer Tables Games that include Blackjack, Roulette and Baccarat.

With some of the best developers on the market including NetEnt, Sg Digital and IGT providing many well known titles, players at Unibet Casino can look forward to choosing from an abundance of games to suit tastes of all types.

By choosing Unibet you’re guaranteed a superior and reliable sportsbook and casino with decades of experience - its status in the top tier of US betting sites is without a doubt.

The only thing that’s probably holding Unibet is brand recognition - not many Americans are aware of Unibet just yet. But once the brand is live in more states, we fully expect both the Unibet sportsbook and casino to blossom in the US.

If you want to ask us something about Unibet, or share your personal experience of Unibet in the US, feel free to get in touch.

Unibet was founded in 1997 by Swede Anders Ström, who, upon being granted the company’s first-ever license for the UK market just one year later, operated Unibet by taking bets over the phone.

From humble beginnings, Unibet has grown into a leading sport betting brand available in over 100 countries, serving more than 5.5 million customers. Unibet is owned by online gambling giant Kindred Group, one of the world’s largest online gambling companies.

Mid-way through 2020, Unibet expanded its US footprint in Indiana, the brand's third operative state in the US.

Unibet is owned by Kindred Group, one of the largest online gambling companies in the world.

Where are Unibet based?

Kindred Group, the online gambling operator responsible for Unibet is headquartered in Malta but has offices in New York and New Jersey in addition to offices scattered across Europe and Australia.

Absolutely. Unibet is a trusted and well respected name within numerous sports betting and casino markets in Europe and Australia.

In the USA, Unibet is an authorized operator in New Jersey, Pennsylvania and Indiana.

Write a review about Unibet