It used to be all about a simple moneyline wager. Nowadays it’s possible to profit from a game a whole host of different ways. While they’ll always be a place for traditional markets, betting companies are continually working to develop the overall betting experience for their customers. The various types of bet available in the US is almost endless and a key reason why the market continues to thrive. 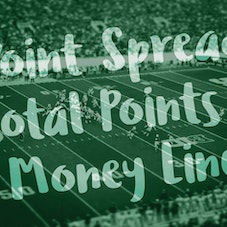 A betting market is a category or specific type of wager.

Within each market, you'll find a host of lines available to bet on.

Knowing how to play each often escapes the attention of seasoned bettors.

By the end of this text, you should have a better understanding of the following types of wager:

The most common bet you’ll come across and, still, the go-to wager for many. But why is this?

Basically, it's due to its simplicity. You’re literally betting on the winner of a game, nothing more, nothing less.

If you think New York Yankees are going to win, you place a money line bet on them to win.

A Yankees victory will win you the wager - it really is as simple as that. Typically, it's NBA and NHL bettors, or low scoring sports, that play money line wagers the most.

Games with two teams skillsets opposite ends of the scale in terms of skillset often throw up little value. For instance, the favorite is often so heavily fancied, the odds are extremely low and hardly worth touching.

A point spread manages to do away with this problem by equalising the chance of either team winning the wager and levelling the playing field. In doing so, a bettor has a reason to wager on both teams, with both sides of the bet suddenly inviting.

Fans of basketball and football, or high scoring sports, are likely to play a point spread.

How a point spread works

The same principle of assigning a plus (+) sign to the underdog and a minus (-) sign to the favorite applies here. But instead of this being followed with a price, each team is given a points value, like so:

It’s ok, a new half point rule hasn’t escaped your attention, the -5 used here is to decipher a clear winner of the wager.

The example above denotes the following:

You may hear the term of a team being able to ‘cover the spread’, i.e. can they win or not lose by the predetermined margin of points. To cover the spread here:

In the event of the points difference difference in the scores is exactly six points, the bettor’s stake will be returned. Referred to as a ‘push’, neither the sportsbook, nor the bettor can be defined as a clear winner.

A point spread is often a type of bet you’ll come across in basketball and football but not entirely. Bettors of hockey and baseball also looking to make a point spread wager can play puck and run lines which work in the same fashion.

The beauty of this type of wager is its relevance across all sports. Even better, you don’t have to worry about which team wins. All that’s important is correctly predicting the total number of points that will be scored by each side.

The sportsbook will list several possible ‘totals’ leaving the bettor to predict whether the game’s total points/runs/goals will finish over or under the given number. Take our game between the 76ers and the Hawks as an example: the projected points total is 65.

If you believe the match will feature over 65 points, you’d bet over. If not, you’d bet Under. Should the game finish with precisely 65 points, the wager will be considered a ‘push’, leading to your stake being returned. Sportsbooks are beginning to combat this however, by adding in the .5 which makes it possible to define a clear winner.

This type of wager allows for two or more single bets to be played at the same time, similar to an accumulator style bet commonly placed in Europe. You can expect greater odds betting this way as is expected when the number of variables are increased.

The chances of winning though rest on all selections being correct; one wrong selection results in the whole bet being lost, regardless of how many bets you have right. Ever heard a buddy claim, “there’s always one’? Now you know why!

Generally speaking, relying on several outcomes significantly reduces the chances of winnings. But the lure of a sizeable sum should the stars align is one many still can’t resist.

Crystal balls at the ready because a hunch on who may win the upcoming Superbowl or Stanley Cup could land you serious dough!

Guaranteed to keep you interested across the whole season are futures bets, typically placed on the winner of an event or competition and normally made before a season starts.

Just like planting a seed and watching it grow, your betting purse could be blooming should your pre-season prediction pay off, particularly if you back an underdog.

5000/1 (£) were the odds for Leicester City of England winning the Premier League before the 2015/16 soccer season kicked off. Unsurprisingly, few parted with their money or even batted an eyelid given the team had escaped relegation the year before.

But Leicester went on to play the perfect season, losing just three times and outplaying the top teams to win the league and cap arguably the most unlikely sporting triumph.

En route to their unlikely triumph, it had emerged a handful of diehard Leicester fans had actually backed their team at those odds, more out of blind love for their team than betting genius, we’d say. Oh but how they were rewarded. Not only did their team achieve the impossible, many pocketed as much as £250,000 ($325,000) for their pre-season punt.

A popular way to bet on the NFL or the NBA, a teaser resembles a parlay bet in comprising of multiple selections. But the difference here is the ability to alter, or ‘tease’, the point spread in your favor to enhance your chance of winning. Sounds good, right? But how the heck does it work?

Once the teaser has been set, all selections must be correct for you to win the bet. NBA lines can be teased by 4, 4.5 or 5 points and work in exactly the same way.

If you’re wanting to get away from betting on the winner of a particular game entirely, then a prop bet may be for you.

This type of wagering covers all bases and allows a bettor to put money on just about anything - within reason of course.

Classic prop bets vary from the player or team to score first, the player to score the most amount of runs, number of interceptions made, that kind of thing. But they can border on the ridiculous too as we’ve seen in recent Superbowl matches.

You can bet on the result of the coin toss or the exact length of the national anthem, while there’s even the option to wager money on the color of the Gatorade which, more often than not, tends to come into contact with the head of the winning coach at full-time.

How to Create an Online Gambling Account for Sports Betting

How Do Sports Betting Bonuses Work?

What is Sports Betting & Why Should I Bet?