It can be difficult to keep up with the ever-changing face of online gambling. Much is owed to continued advancements in technology which manages to enhance the player’s experience no end. None more so than betting during live events which adds another dimension entirely to sports gambling, as you’ll learn in this chapter. 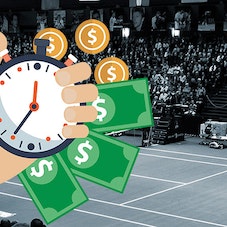 What is in-play betting?

No longer is it the case of only being able to bet pre-match. With smartphones now serving as mini-computers in our pockets, rarely does a sports fan watch a match without consulting his/her mobile device for the very latest in-play odds.

The option of wagering on a game as it’s taking place has taken sports betting to the next level, allowing bettors to hedge money on the latest odds in line with what is directly happening in the game.

As well as creating even more of an interest in the match, the ability to bet in-play brings about the prospect of winning instantly, or, certainly at a quicker rate you would waiting for the end of the game say.

Your personality could have a bearing on whether this appeals to you, with this method more appealing to ‘chancers’ and those willing to take a risk in return for high rewards. For players who prefer to bet more strategically and apply more research and rationale, the idea of impromptu betting will sound unappealing.

The same process applies whether you're wagering prior to a game or during the action, i.e predicting an outcome, finding the market and the odds and staking money on the prediction to come true.

In-play betting brings a new wealth of options to the table however.

For instance, you may have bet on the first team to score prior to the game starting. Ten years ago, the market would've ended upon the game's opening points being scored. But now, odds will instantly roll out on the NEXT team to score, allowing you to bet in real-time and alongside the action.

For example, if Tom Brady goes off injured for the New England Patriots, the odds on them winning are likely to increase Without the qualities and leadership of their star man, the chances of the Patriots winning will have gone down and the odds will reflect this. It could be an injury but the odds can fluctuate purely if a team or player looks below par.

It goes without saying but in-play betting also varies in the amount of time you have to react to an in-game event and place a wager. You may be used to spending some considerable time carefully researching and planning your pre-game wagers but time goes out the window when it comes to betting as the action is taking place, as do some of the markets. Ultimately though, it’s the now-or-never element that provides the thrill and sees bettors try their luck time and again.

The aforementioned points addressed above can be viewed as advantages also.

Variety in betting is essential and cannot be underestimated. The more bets available, the more chance there is of finding a bet you’re comfortable with, as well as finding genuine value.

What’s more, we mentioned how the odds can fluctuate in line with what is happening on the pitch at that time. The bookies judge the situation based on their opinion, a view which can sometimes become blurred in the heat of the moment.

In other words, the odds offered by bookmakers are not always right. If, with solid knowledge of the sport and teams in question, you envisage a different outcome to what the bookmakers have predicted, there’s the opportunity to take advantage of miscalculated odds.

Finally, as well as the now-or-never element mentioned providing the excitement factor, it can actually provide clarity too. Speaking from experience, there have been numerous occasions where I have talked myself out of bets with stats, head-to-head records, you name it, instead of going with a gut feeling that, in the end, would have proved more profitable.

A striker through on goal in a soccer match can often have too much time to think about where he will place the ball, often resulting in a miss. Even the best of strikers will admit to acting on natural instincts rather than given time to mull things over and the same can be said of betting also.

How to Create an Online Gambling Account for Sports Betting

How Do Sports Betting Bonuses Work?

What is Sports Betting & Why Should I Bet?