Sports betting is legal and available through the city's mobile sports betting, GambetDC, operated by Intralot and overseen by the DC Lottery.

DC - District of Columbia Online Gambling - At A Glance

Legal online gambling since: May 2019

Washington D.C has taken a major step towards introducing sports betting by voting in favour of legalising the industry.

The Sports Wagering Lottery Amendment Act of 2018 has already been approved.

If, as expected, the major passes the bill, we can expect sports betting to become a permanent fixture in the nation’s capital early in 2019.

The proposed model of sports betting in DC will be unique to what has already gone before in other states though, in the sense it will be run predominantly online.

Brick and mortar casinos are known to be lacking in the state’s capital, leaving the city’s stadiums, arenas, restaurants and liquor stores to house the physical sportsbooks.

But bettors will be able to benefit most from plans by the D.C lottery to roll out the industry online entirely via one single app platform, an idea unique to any other state so far and one that has its backers, but also many critics.

Snapshot of landscape in D.C:

- Bill approved and waiting to be passed

- Sportsbook operators to use official league data and pay a 0.25 % royalty fee to major sports leagues based on amount wagered (proposed)

- A ban on physical sportsbooks around sports stadia proposed

The framework put forward for online sports betting in Washington D.C would see tax revenues fund early childhood education and cultural programs in an attempt to avert bettors from becoming addicted to gambling.

In addition, a legal, regulated industry primarily online will compete directly with the illegal betting market which is still rife while there is no legitimate alternative. Nevada has proven how a statewide offering on online sports betting can impact on the behavior of sports bettors with over 70% of bets believed to now take place via a mobile app.

Rolling out the industry online almost instantly, will not only see bettors guaranteed a safe betting experience but also put one more nail in the coffin of illegal sports wagering.

However, there are concerns one single betting app will stifle competition among betting operators. For instance, how will companies be able to market themselves and attract consumers through a closed market? And even if they are successful in doing so initially, the opportunity for the market to grow will be restricted somewhat.

The main crux of the problem is this. Sports betting regulators can’t advertise on Google, meaning sports bettors in search of sports betting won’t necessarily know of the new, regulated market in D.C. A single model will not only deny companies the opportunity to promote themselves but allows illegal sites to remain prominent, despite the new ruling.

How to set up a sports betting account in Washington D.C

Under the proposed bill, the state’s lottery will be responsible for overseeing the sports betting industry in its entirety, both online and at a handful of sporting venues within the state.

The lack of land-based casinos in the state has undoubtedly played a part in the proposed model, the first of its kind among the states to have legalized online sports betting.

Yet, though it may be restrictive for betting operators, the immediate availability of a betting app will provide you, the bettor, the freedom to bet how and when you like within the state’s borders via the use of Geolocation which will confirm your exact whereabouts.

At the time of writing only patrons of Nevada and New Jersey can claim to have the luxury of wagering from the comfort of their own home, regarded as crucial in seeing the sports betting industry prosper long-term in the states.

Although details of how the app will function have not yet been revealed, there’s the possibility that creating an account will involve you paying a visit to one of the few physical sportsbooks in order to confirm your identity.

Regardless of whether you set up an account in person or online, you’ll need to provide your full name, date of birth and address at the very least. Validating your identity with an ID card and proving your address with a recent bill or receipt may be necessary also.

These are all formalities that will take no longer than 10-15 minutes to complete. Once done you will be member of the sportsbook and ready to wager straight away.

Most popular forms of betting for Washington D.C

Whatever your game, whoever you’re backing, you’re almost certain to find the wager you’re after. Although betting in the most traditional way, i.e. on a team to win, remains one of the most popular wagers, there are now dozens of new markets that cover all potential eventualities in the game of your choosing. Here are the most common played across the main sports in the US:

A wager on a single game determined by a point spread or money line. Still the traditional bet for the majority.

One team will carry the tag of favorites, the other the underdog through monetary values. For example, the team expected to win will be assigned a minus (-) value which refers to the amount that needs to be wagered in order to win $100. The team not expected to win (the underdog) is given a positive (+) and indicates how much can be won by wagering $100.

The same principle as the above but the team you back must win by a certain number of points in order for the wager to be successful. Your sportsbook will offer a points margin between the two teams based on recent form, injuries/suspensions, home advantage. Let’s say the New England Patriots -10, are playing Oakland Raiders +10. A point spread wager on the NE Pats would need Tom Brady’s side to win by at least 10 points in order to cover the spread. A victory margin of less than ten points would not yield a return.

An alternative to betting on an outright winner, this wager requires you to predict the total number of points scored in a game. In general, this tends to be the combined total between both teams with the bookie calculating totals based on stats/form and circumstance.

The equivalent of an accumulator bet which has a popular following in Europe, your bet will consist of backing a number of teams to win, all which need to be successful for your wager to win. This wager can yield large winnings however, having to rely on many eventualities carries more risk and means the stars really need to align for this bet to come in. ‘There’s always one’ (that lets you down) tends to be the recurring theme when playing parlay. With this is mind then, we’d recommend staking low amounts here.

Typically placed before a league or competition begins, this wager is more of an investment and guarantees interest in a season over a long period. If you manage to correctly predict a team to win the championship or reach the Superbowl final for instance, this is a bet that can bring a substantial return.

Laying a wager while a match is ongoing has become increasingly popular with the growth in mobile apps which that can be when watching your favorite game or team. The odds given reflect the in-game occurrences, while the amount of markets you can delve into continues to rise.

The type of bet in which you can see a return the quickest. Instead of waiting for the outcome of the game, your wager will involve something happening. For example, the player to score the first touchdown or be ejected from a game. This wager also extends to happenings the very definition of chance, such as who will the coin toss in the Superbowl final.

With one or two exceptions, the majority of the wager options mentioned are applicable across America’s four major sports.

As for who you can bet on, the nation’s capital is well represented in each major league providing plenty of options for wagering throughout the year. The fact that “sports betting parlors” are set to pop up at each of the professional sports stadiums will offer the ultimate betting experience for sports bettors of D.C.

It’s difficult to come across a more picturesque ground in MLB than The Capitol Riverfront, home of the Nationals. The team isn’t bad either having finished National League East Champions four times since 2012, the latest success coming in 2017, not bad given the Nationals only come to be known as they are today (originally founded as the Montreal Expos) since 2005.

Three-time Superbowl winners, The Football Team have a rich history and can look back on success as recent as 2015 when head coach Jay Gruden led the team to the NFC East title. It’s often a challenge to find a spare seat at The FedExField such as the lure of seeing The Football Team play live, with the stands a sea of burgundy and gold come game day.

Another D.C side steeped in history is the Wizards, members of the Eastern Conference Southeast Division and NBA final competitors four times, of which they won one in 1978. The Capital One Arena is home, though you may be surprised to know the franchise has relocated three times and changed its name on no less than six occasions. Before becoming the Wizards in ’97, the team was the Washington Bullets for over two decades!

Without question the most successful of the state’s sports teams of late, The Capitals, led expertly by captain Alexander Ovechkin defeated Vegas Golden Knights in 2018 to win their first-ever Stanley Cup, having also secured the division championship, the eleventh time they have done so in the club’s history. 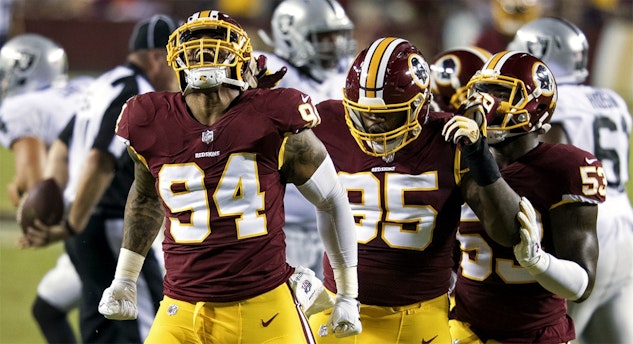 Sports betting had been against the law since early in the 20th century when Washington’s criminal code made any form of gambling on sports illegal. The language used ensured there was a blanket ban across every sport you could think of - no exceptions were made.

The need to raise cash when the city fell on hard times in 1989 resulted in the D.C lottery board attempting to initiate a “sports pool lottery” in which players would be able to wager on a number of NFL games per week.

The idea didn’t go as far as offering single game wagering but was along the lines of the lottery scheme introduced by Oregon in the same year and was designed to bring sports betting, albeit in a very limited form, to a city very much in need of an injection in revenue.

Unsurprisingly, the proposal failed to gain any momentum having been majorly opposed and widely criticized in many quarters, including the major leagues and thus was swiftly shelved.

However, with the Supreme Court ruling in favour of sports betting in May 2018 and the general consensus of sports betting continuing to evolve, the opportunity for the District of Columbia to roll out the industry in its entirety has now arrived.