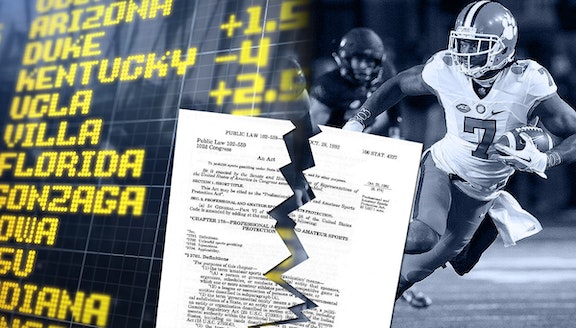 This article examines how the legal sports betting landscape has developed in the two years since the federal ban on the industry was abolished.

A lot has happened in the two years since the Professional and Amateur Sports Protection Act (PASPA) was ripped up and America opened its doors to legal sports betting. Trying to keep up with the fastest-growing gambling industry in the world can be heavy work, particularly if you’re new to sports betting. With that in mind, here are six easy-to-digest takeaways of what has changed and how the landscape shapes up today.

Each state is free to launch sports betting on their terms

“So sports betting is legal across all states?” is a common misconception of the landmark ruling, which simply isn’t possible. Each state is governed by its own set of rules. The lifting of the federal ban on US sports betting in 2018 simply authorized states to decide on legal sports betting for themselves, as we have and continue to witness. Some states, i.e Delaware and New Jersey anticipated the decision of the Supreme Court and quickly launched an already approved framework shortly after.

Is sports betting legal in my state?

Overview of legal sports betting in the US

According to the American Gaming Association, 18 states have regulated sports betting markets, 5 states have authorized sports betting but have yet to launch and another 16 states have active bills ‘in the mix’ (i.e bills have been pre-filed, introduced in the state legislature or have a voter referendum scheduled. In short, this means patrons in almost a third of US states can bet on sports legally while another third of states are pushing for legal markets. That’s some rapidity in just over two years!

While we all crave the opportunity to bet from a mobile device, not every state is like New Jersey where statewide mobile wagering is part of the legal framework. Arkansas is one such example where sports betting is legal but online or mobile sports betting is not permitted - a bet can only be placed from a land-based gambling establishment. Other states such as Illinois require bettors to visit a physical location in-person to register for an online betting account. Iowa too has opted for this method as a way of initially protecting the land-based casino and retail sportsbooks. From January 1, 2021, however, the restriction will be lifted to allow bettors to sign-up wherever they wish.

As alluded to, there is a different framework for the industry in every state, no two states have rolled out sports betting the same way. Some have launched statewide mobile wagering giving patrons the flexibility to bet from home (i.e New Jersey, Pennsylvania, West Virginia, Indiana, Colorado). But among those, there are different tax rates on sports betting revenue - take the contrast between New Jersey (14.25%) and Pennsylvania (36%) for instance. In the same two states, there’s also a stark contrast between the cost of a license: $100,000 in NJ compared with the mouthwatering $10 million in PA. Other states remain cautious about the idea of fully opening up the market to mobile through fear of harming retail casinos and have kept sports betting to physical locations only (i.e. New York, Arkansas, Montana).

Essentially, the entire notion of legal sports betting in the US is based on Geolocation. Sportsbooks rely on the technology to determine the location of a player and ensure only wagers are accepted by a person physically present in the state only. Think of it as a virtual fence all around your state; everybody can bet inside the fence but not outside of it. Without Geolocation, legal sports betting simply wouldn’t function. Geocomply is the company - or brains - behind the operation and is active in the majority of states that have launched regulated betting so far.

Legal sports betting is up and running in almost a third of US states. But that doesn’t mean illegal, offshore betting sites have been eradicated. In states yet to legalize sports betting sites especially, unregulated sites are still prevalent, which remains a huge concern. There’s the issue of consumers unable to distinguish between legal and illegal sites too, as highlighted by Bill Miller, President, and CEO of the American Gaming Association. If you’re not aware of the dangers of offshore sites, it’s simple: they’re illegal and known to exploit customers. Such sites can circumvent US law by operating from countries primarily in the Caribbean. Because they are unregulated, offshore sites do not always pay out winnings and do not consider the safety and security of players one little bit. The more states that make sports betting legal, the faster these types of sites will be removed from the equation and the industry can become safe for all.